CK Raut, Who is he? His Political Career, Agreement, and More

Many might not know this but, Chandra Kanta Raut, widely known as CK Raut is a scholar and a leading youth, engineer, scientist, programmer, author, politician, author, activist, and whatnot.

He is a newly elected Member of the Parliament of Nepal from the Janamat Party. He is a very kind, honest, and influential personality.

Chandrakant Raut was born in a small village located 10 km west of Koshi Barrage, called Mahadeva village of Saptari district of Nepal on 31 August 1997 AD. He spent all his childhood in his village. Talking about his education, he completed his primary schooling in his village whereas, for high school, he completed at Laxmi Ballav Narsingh Secondary School in Babhangama Katti.

Since childhood, CK Raut had an extreme interest in studies. That’s why he entered Kathmandu to pursue a Computer engineer from the Institute of Engineering (IOE), Pulchowk, which is the best leading engineering institution in Nepal to date. He is a gold medalist of IOE, Pulchowk.

Later he went to London, for completing his Ph.D. degree at Cambridge University. Similarly, he also went to Japan to study at the University of Tokyo.

CK Raut is 5 feet 8 inches and is the founding president of the Injot Movement, a social transformation initiative targeted at Nepal.

Dr. Raut has worked in big firms in the US after completing his Ph.D. degree from Cambridge University. He has worked as a computer Missile engineer, and United States Defense Programmer. He was doing well with the job but in 2011, he returned to Nepal. Why? He returned to Nepal to give back to his country and homeland.

In 2011, he jointly launched a Madhes independence movement. The young leader, who appeared to have given up a nice life in the West for the cause of Madhes, immediately drew the attention of the Madhesi teenagers. His many arrests as a result of his uninhibited tirades against the “racist” Kathmandu regime further increased his appeal.

He then formed Alliance for Independent Madhesh. It identified itself as a confederation of Terai people who had suffered discrimination under the Pahadi civilization in its manifesto. It has members from numerous sub-ethnic groups, activists, political parties, and organizations that aim to create an independent Madhesh.

Despite being founded in 2007, they did not make their manifesto public until a press conference on May 21, 2012, in Kathmandu. This was to bring about the independence of the Madhesh through peaceful and non-violent means.

CK Raut saw many discriminations, racism, and slavery imposed on Nepali people of Madhesi origin by the “so-called” Pahadi people of Nepal. And he wanted to end so. He was not like other people who would just sit back and relax. He indicated to end the unfair discriminations for which he was even kept on house arrest.

In the 2022 election of Nepal, he won against Upendra Yadav and became a member of the parliament of Nepal from his own party the Janamat Party. 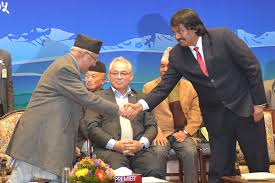 Seeing the racism and rational discrimination done by Pahads against the Nepali people of Madhes, he signed an 11-point agreement with the the-then federal government of Nepal under the CPL UML Leader KP Oli, pleading for the sovereignty of the country and protecting his people. The agreement was signed between the the-then home minister, Ram Bahadur Thapa, and CK Raut at Rashtriya Sabha Griha.

The 11-point agreement between CK Raut and the Nepal government stated that CK Raut and his party, Alliance for Independent Madhes, will respect the sovereignty and territorial integrity of the country AND they will follow democratic means to address the dissatisfactions of people, including those of Tarai-Madhes.

Similarly, adequate compensation and one member of the family will be provided with a government job in the family of Ram Manohar Yadav, an AIM cadre who died in jail.

The information about his in-depth personal life is not made public. He likes to keep his professional and private life separate. That’s why information on his wife and family is not known. When known this article will surely be updated timely.

Other than his political career, CK Raut is a literature lover. He loves to read books and has a keen interest in writing and publishing books. He is a very down-to-earth person and knows his ground. Till now, he himself has written several books which involve his struggle, career, and life. Some of his books are:

His book, Denial to Defense, is his autobiography and contains his life stories incorporating the visit of his father to Kathmandu and his life in IOE, Pulchowk. This has gained positive responses from many famous, and intelligent personalities all over Nepal and the world.

CK Raut many time has become a burning topic in Nepali news. Due to his interviews in Tamasoma Jyotirgamaya in AP1 HD, people are able to see his calm personality and his extraordinary thinking.

Moreover, these days he is popular for being elected as the Janamat Party’s Parliamentary Party (PP) Leader. He has received a lot of support from this General Election, 2079.

Similarly, the news of CK Raut and Rabi Lamichanne, a new face of Nepal’s political system, talks with the government in Balkot is going viral.

You season 4 cast: Meet the cast of Netflix’s thriller

Meet the Season 3 Cast of You: New Characters, Ages, and More

Jennifer Lopez reveals Madonna should’ve kissed her instead in 2003

Celebkura is an authentic Entertainment online platform that focuses on providing high-quality Celebrity News, Articles, or any latest trends. We at Celebkura go through extensive research only to provide a fact-based result to our audiences.